I don’t know about the rest of the world but Los Angeles has been consumed by the Conrad Murray trial. Let’s face it, this man did not go to medical school with dreams of being remembered as the man who killed Michael Jackson.
But today was the day the verdict was read and all around the courthouse there were fans. There has been a large contingent from Germany and France. They made the trip just to show support during the trial. This is where all those envy-inducing european holidays really come in handy.
From Thriller-era paintings in store windows to an asian flavored portrait at Avenue de New York, Paris streets have become a tribute to the King of Pop. 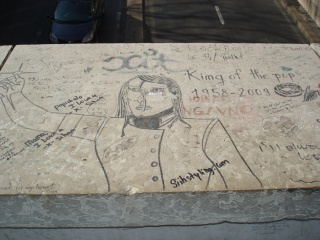