Skip to content
It’s a strange thing but as much as I love Paris and all things french, I don’t speak the language. Funny, I know, but  my love of French culture has allowed me to travel to France with the barest minimum of language skill.
Thank God for my good ear because I am excellent with pronunciation and my gift of mimicry has allowed me to fake my way through many dinner orders. I’ve made an art of standing in line at the boulangerie, listening to the people ahead of me placing their orders, then repeating to the counter person what I heard; et voila!
Bon jour, Madame.
Je voudrais une baguette traditional s’il vous plait.
Merci
Bonne journee.
How easy was that!
Trust me, nothing so simple as a few words of french can come between me and freshly made bread. Ask anybody.

I recall enrolling in a  course at Alliance Francaise in NYC many moons ago. It didn’t go well. I remember the instructor seemed to resent having to teach French to a group of uncultured Americans. I also recall a woman in the class named Rebel. I found her interesting and annoying at the same time but not in equal measure. The balance of these traits were not in her favor.
I believe Rebel had lived in Paris as an exchange student, for a semester. She was seasoned and as far as I was concerned, didn’t belong in the beginners’ course. She seemed to know the meaning of every word and phrase. But she had no linguistic dexterity. Every word she spoke came out mangled as if she had her fist in her mouth.
But alas, the time has come for me to dive in and make an honest attempt to be conversant in French. All of my friends who are native speakers are becoming nearly fluent in English, thanks to me. It’s time for them to return the favor. Yeah right, fat chance. They are French, after all, and not inclined to see me prove them not quite superior. Gotta love them.
So I’m thinking of enrolling in a French language course again. Now that I have a few more trips to Paris under my belt, we’ll see how much of a Rebel I can be. 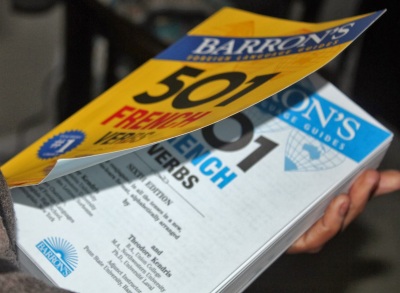